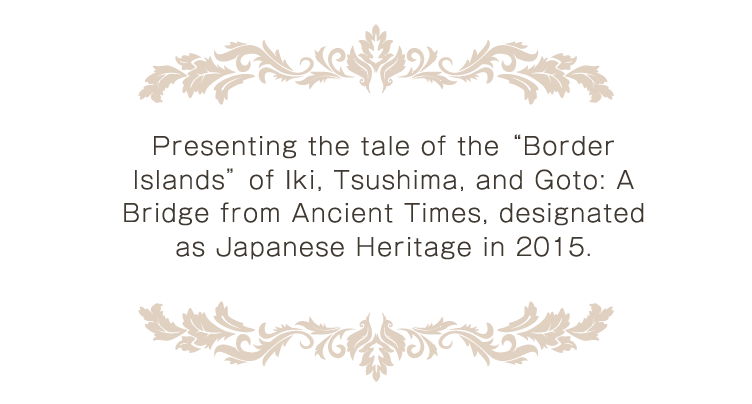 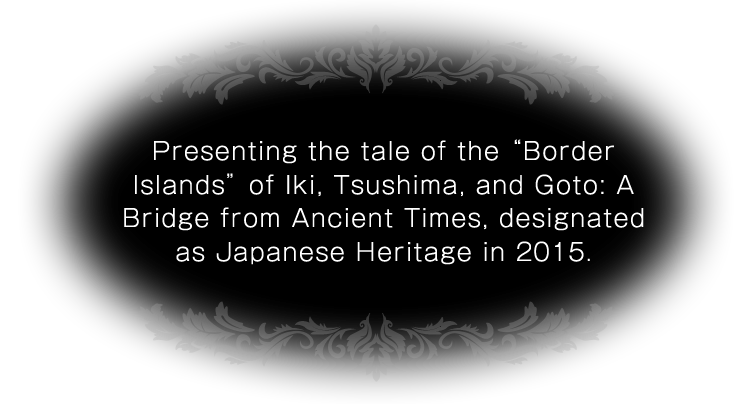 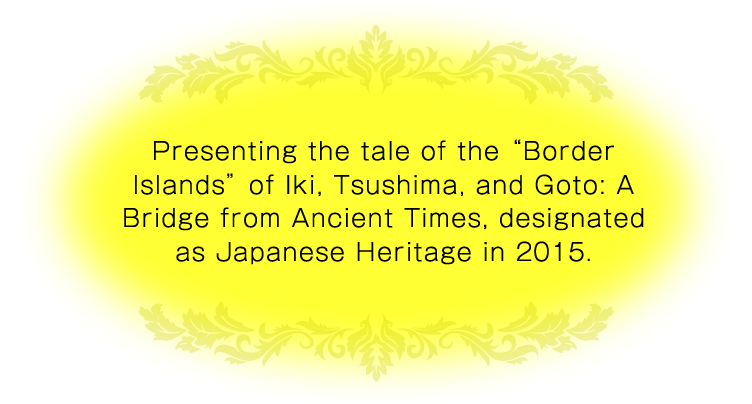 The island nation of Japan is made up of 6,852 islands of varying sizes. Nagasaki Prefecture, at the western tip of Japan, has 971 islands, the most of any prefecture.
Iki and Tsushima, like stepping stones across the sea to the Korean peninsula, and the Goto islands, stretching in a chain in the East China Sea, have, since ancient times, been strategic locations in the Ocean Way that connects Japan with the Asian continent. Their geographical proximity to mainland China and the Korean peninsula placed these islands at the front line of both conciliation and conflict.

The Border Islands in the Gishi Wajinden

In the days when Japan was known as the land of Wa, envoys from Gi (China) traveled south down the Korean peninsula via Tsushima and Iki to the country of Yamatai, which was ruled by the queen of Wa, Himiko. In the Gishi Wajinden(*1), or Account of the Wa People As Recorded in the Books of the Kingdom of Gi, a book in the Chinese historical text, Records of the Three Kingdoms, Tsushimakoku (Tsushima Province; today’s Tsushima City) and Ikikoku (Iki Province; today’s Iki City) are described as follows.
“From Geumgwan Gaya, we crossed the sea for the first time and landed in Tsushimakoku. The mountains were steep, deep forests covered the land, and the roads were like animal trails. There were very few good rice fields, and the people lived on foods from the sea and traveled north and south to trade.
We left Tsushimakoku and traveled further south across the sea to Ikikoku. The name of the sea was Kankai. There were many forests and a few rice fields, but even cultivating these fields did not provide enough to eat, so its people also traveled north and south to trade.” (Excerpt from Gishi Wajinden (contemporary translation))
Located just 49.5 km from Busan in South Korea, Tsushima has steep mountains and sheer 100 meter-high cliffs. 89% of the island is forest, with the primeval forests that remain on Shiratake and Mt. Tatera designated as natural monuments of Japan. These features overlap with the description of Tsushima found in the Gishi Wajinden.
As described, due to Tsushima’s geographical conditions, with very little flat land or land suitable for farming, from ancient times, its people traveled by boat to the south (the Japanese archipelago) and the north (the Korean peninsula), and this resulted in interactions between people and cultures.

*1. Common name for Volume 30 of the Book of Wei, Account of the Dongyi (literally “Eastern Barbarians”): The Wa People

City of International Exchange on the Ocean Way

In contrast to Tsushima, Iki is a flat island with few mountains. The plain of Fukaetabaru, in the basin of the Hatahoko River, the island’s longest, was the site of Harunotsuji, the capital of Ikikoku in the Yayoi period.
The ancient seacraft that plied the waters between Japan and the Korean peninsula would lay anchor in Uchime Bay in Iki Island’s east, where people and goods would be transferred to smaller boats, which would head towards a wharf about 1.5 km up the Hatahoko River.
The remains of that wharf discovered at the Harunotsuji Ruins show that the wharf was a magnificent structure, worthy of the gateway to the capital of a kingdom, that was built with advanced civil engineering techniques from the continent. It is believed to be the oldest extant wharf ruins in Japan.
Harunotsuji, which was the first province in the land of Wa to obtain information about the world beyond Japan’s shores, was a capital built on maritime trade and a forerunner of the city of international exchange. Its residents not only included native Japanese, but also people who moved there from the Korean peninsula, and the city was teeming with vitality.
Many diverse artifacts, both local and from overseas, have been excavated from the Harunotsuji Ruins, including earthenware vessels made on the Korean peninsula, coins from China, and a stone human-face statue. Particularly striking are the shiny blue glass beads from China, which must have captivated the women and children of the city.
Recreations of buildings of the era and the bucolic scenery around the site of the Ruins give the impression that one has traveled back in time to the Yayoi Period.

Megalithic Tombs Tell the Tale of the Border Islands

From the second half of the 6th century, as relations between Yamato (the ancient name for Japan) and the Korean kingdoms, including Silla and Goguryeo, soured, many kofun tombs were built on Iki. From the stone chambers(*1) of the Soroku Tumulus and Sasazuka Tumulus and other tombs, which were built with giant boulders and are believed to be those of powerful figures in Iki, many artifacts that tell the tale of the trade that took place with mainland China and the Korean peninsula. In particular, items such as the white and green painted ceramics from Northern Qi and green-glazed earthenware from Silla, were items of extreme value that only a very few powerful people in the society of Wa of the time could have been owned.
It is thought that the people buried in the megalithic tombs on Iki included powerful figures sent there from the Yamato government because of the importance placed on relations with the Korean peninsula. This means that the Iki of that era played an important role in relations with the Korean peninsula.
Stand in the coolness of the stone chamber of one of these megalithic tombs, and you will be able to sense the power and influence of the people who were laid to rest there.

*1. Chamber in which the dead were laid to rest

The Border Islands, Where You Can Sense the Longing of the Border Guards

On the Korean peninsula, the Tang dynasty (China) joined forces with the Korean kingdom of Silla to defeat the kingdom of Baekje. In 663, Yamato sent a great army to support Baekje’s restoration, but suffered a major defeat (the Battle of Baekgang) at the hands of the Tang-Silla allied forces. To prepare for an invasion by the Tang-Silla, Yamato stationed border guards (sakimori(*1)) and established beacons(*2) in the strategic locations of Tsushima and Iki, and built the Korean-style mountain fortress of Kaneda Castle, using the building techniques of Baekje citizens living in exile on Tsushima.
Sent to Tsushima and Iki mainly from the Eastern provinces(*3), these border guards led self-sufficient lives as they defended these remote islands. Some of them were unable to return to their home province after their three-year posting ended. These soldiers’ feelings of longing for their homes and families are immortalized in Song of the Sakimori in the Manyōshū, Japan’s oldest collection of waka poems.

No clouds at the foot of the mountain peaks of Tsushima.
As I gaze on the clouds flowing from the mountains of the gods,
I think deeply of you.

As you stand on the ruins of Kaneda Castle and gazes out on the border seas, you can picture those long-ago border guards as they longed for their homes.

*1. Soldiers who guarded strategically important locations in North Kyushu in ancient times
*2. Set-ups that used smoke and fire to warn of invasions by foreign enemies
*3. Today’s Chubu and Kanto regions

The Border Islands, the Point of Departure for the Japanese Missions to Tang China

From 630 to 838, Japan sent multiple diplomatic missions to Tang dynasty China, each consisting of several hundred envoys divided among four ships, to gather information about Korea and other parts of East Asia and to learn about the advanced systems and culture of the Tang dynasty. These missions initially passed Iki and Tsushima, and traveled along the Korean peninsula to reach the Chinese mainland. However, after the Battle of Baekgang in 663, when diplomatic relations with the Silla kingdom soured, the missions started taking a much more dangerous route, sailing across the East China Sea from the Goto islands and directly to mainland China.
Given the way the ships were built and the seafaring technology of the day, a safe return to Japan was a feat of great difficulty. At their last port of call in Japan before making the treacherous crossing, the envoys prayed for a safe voyage as they headed off, fully prepared to die in the attempt.
Two of Japan’s most famous Buddhist priests, Saicho and Kukai, traveled to Tang China from Goto on the diplomatic mission of 804. In China, they studied the latest in Buddhist teachings and brought them back to Japan. Famously, Saicho later formed the Tendai sect and Kukai the Shingon sect of Buddhism. Tsushima and Goto still have several legends concerning these two famous priests.
Gotō, the last glimpse of Japan seen by the envoys as they departed for Tang dynasty China. As you gaze out on the East China Sea, Jihongai(*1), the words left by Kukai will surely echo in your heart.

*1. Meaning “to depart from the farthest ends of Japan”

The Joseon Missions to Japan and the Tsushima Domain

Since ancient times, due to its geographic proximity to the Korean peninsula, Tsushima’s daily life depended on trade with Joseon (Korea). In the Muromachi period, the So clan, the head family of Tsushima, came to play a central role in trade with Joseon. However, when Toyotomi Hideyoshi sent troops to invade Joseon(*1), diplomatic relations between Japan and Joseon were severed. For Tsushima, which relied on trade with Joseon, restoring those diplomatic relations became a matter of life or death.
After Hideyoshi’s death, So Yoshitoshi, the first head of the Tsushima Domain, sent envoys to Joseon on multiple occasions, taking great risks, such as forging credentials, in its desperate quest to restore ties. In 1607, he succeeded in bringing the Edo period’s first Joseon mission to Japan(*2). Subsequently, over the next 200 or so years, a total of twelve such missions traveled to Japan, and the Tsushima Domain was solely responsible for working-level diplomacy between Japan and Joseon.
For two neighboring countries to maintain peaceful relations for more than 200 years is very rare anywhere in the world. At the heart of these strong ties was the philosophy of Amenomori Hōshū, a Confucian advisor to the lords of the Tsushima Domain. “Commune with sincere hearts, without mutual deception or quarrel.” These words have much in common with the modern concept of international exchange.

*1. First invasion (Bunroku no Eki) in 1592, second invasion (Keicho no Eki) in 1597
*2. A large-scale diplomatic mission tasked with delivering a sovereign message from the King of Joseon to the Japanese Shogun